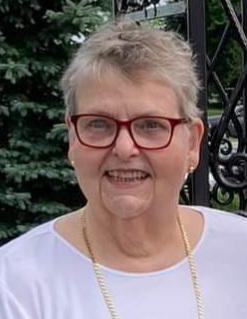 Chelly Ann (Mort) Kenney, diagnosed with cancer in July, died at her home on Saturday, August 27, 2022. A celebration of Chelly's life will be held at 11 a.m., Tuesday, September 6, 2022, at Collegiate Presbyterian Church in Ames, IA. Visitation will be held from 5 p.m. to 7 p.m. on Monday, September 5, 2022, in the church's Helser Chapel. Chelly will be buried at a later date in the Malvern Cemetery.

Chelly Ann Mort was born October 24, 1947, in Omaha, NE, to George and R. Charlotte (Wederquist) Mort. She grew up in Malvern, IA, graduating in the class of 1966. In college, Chelly studied English at Iowa State University and Boise State University, then earned a Master's Degree in Education from the College of William and Mary. Immediately, and always, a teacher, Chelly began her life's work at Peninsula Catholic High School in Hampton, VA, continued it at Abraham Lincoln High School in Council Bluffs, IA, and completed it with the Department of Defense Dependents Schools (DODDS) in Incirlik Turkey and Mannheim Germany.

Chelly met James (Jim) Carleton Kenney at Iowa State University and they were married on August 18, 1968. They traveled the world together and along the way, were blessed with two daughters, Elizabeth and Rachel. They retired to Ames in 2011 to be closer to their daughters, family, friends and beloved Cyclones. Jim and Chelly recently celebrated their 54th wedding anniversary.

Chelly had as many hobbies as her cats had lives; but she excelled at relationships and at helping others. She was President of her P.E.O. Chapter LN-Ames, was an active member of Beta Sigma Phi, the rummage and funeral committees at Collegiate Presbyterian Church, Questers, the Iowa State Women's Club, and many quilting guilds and book clubs.

Memorial contributions may be directed to Quilts of Valor Foundation, PO Box 191 Winterset, IA 50273, www.qovf.org. Condolences and memories of Chelly may be shared at www.amesmonument.com.

6 people have supported the family by purchasing them flowers or gifts from the Healing Registry.

Our family was neighbors with the Kenney family when we lived in Bellevue, Nebraska. We quickly became friends and family to one another and have stayed in touch over the years. Chelly was a guiding star to her family and to so many of us. She had a warm sense of honor and a most caring heart, always willing to lend a hand, to dole out praise and to encourage and inspire us. I loved Chelly’s passion for quilting and appreciated her wonderful sense of color and design, not to mention her love for wonderful fabrics. She lived a life of heartfelt service for her family, friends and community - and all the hundreds of students she taught. May God bless her family greatly and bring peace to your hearts our family is so very grateful and honored to have known and loved Chelly Kenney. We will miss her beyond words.

Chelly will be greatly missed at our book club. She shared her expertise as a teacher of literature to add to our discussions. She and I had a common bond as teachers of military children overseas. She made us smile.
Rebecca Hanlon

The Mary and Roger Poort Family of Malvern is sorry to hear of Chelly’s passing. Upon graduation from ISU, Mary’s first years of teaching found George and Charlotte Mort to be friendly and welcoming while teaching art next door to George’s shop classroom. They were so proud of their children. Teaching must have been in the bloodline! Jim — are you related to the Bill Kenney’s, former Ag Teacher In Edgewood, Iowa?

Chelly Kenney - what an amazing woman. She was my first friend when we first moved to Ames 8 years ago. Chelly left evidence of her generous, kind heart everywhere she went and with all she knew. Hers was a life well-lived, an example for all of us. I offer my deepest, heartfelt sympathy to all who mourn her passing; there are so many people whose lives she impacted. May grace and peace be yours in abundance as you move forward.

What a wonderful, warm, and caring friend. The world is a much sadder place without Chelly!

The attached photos are added to the memorial of Chelly Ann Kenney to help share their legacy.

Thank you for sharing your memory of Chelly