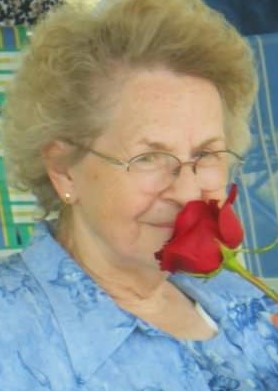 Due to state and federal guidance on gatherings due to the COVID-19 pandemic, the family will not be having a public memorial at this time. A Celebration of Irina's Life will be held at a later date.

Nellie Irina Lafrenz was born December 19, 1942, in Davenport, Iowa, one of four daughters born to Olin DeWayne and Irene (Darrah) Laws. She graduated from Bloomfield High School in 1961. Irina was united in marriage to Marvin Lafrenz on February 10, 1963. The couple settled in the Long Grove and Eldridge area and was blessed with two children, Tim and Tish.

Irina worked as office manager for several doctors' offices over the years and, most recently, was employed as the "weed woman" for DMACC, where she utilized her green thumb by keeping the campus flower beds beautiful. In earlier years, she maintained a large vegetable garden, tended her flowers, managed Bingo games in Long Grove, and made numerous blankets for hospitalized children through the Linus Project. She was honored for her many years of service with the Boy Scouts of America. Irina and Marvin took great joy in their family and even followed their daughter's moves to help raise and nurture their grandchildren. Irina was a wonderful cook and will be remembered for her loving, giving nature. She constantly sought out ways to help others and often welcomed new friends with the invitation to "just call me Grandma."

She was preceded in death by her mother; and by her son, Tim Lafrenz.

Ames Monument & Cremation Center has been entrusted with the care of Irina and her family.

I was blessed to have worked with Irina for a few years when I was younger, she was always full of love, laughter, and stories of her children and grandchildren. I always hoped to "bump into her" on my trips home. She was a beautiful and kind soul. My deepest sympathies are with you, her family. May God bless and keep you Irina, you will be very much missed.

Marvin and Tish, I am so sorry for your loss. My parents, Allan and Dorothy Fischer, thought so much of your family and Irina. I will be praying for your for peace and comfort in this time. Carol Davis

Condolences to her family. She was so proud of her family. And would have stories about them. Diane Whitson

Sorry for your loss at this timr
Bob and Therese Timmerman

Aunt Rina always had a smile on her face and a hug to give and if you left her house hungry that's your fault she always made sure you had a full belly ..... Love you Aunt Rina will miss you so much

The services for Nellie have not yet been added. Please sign up below to be notified when the services are ready.

The attached photos are added to the memorial of Irina Lafrenz to help share their legacy.

Please help memorize Irina Lafrenz by recording your attendance below.

Thank you for sharing your memory of Nellie