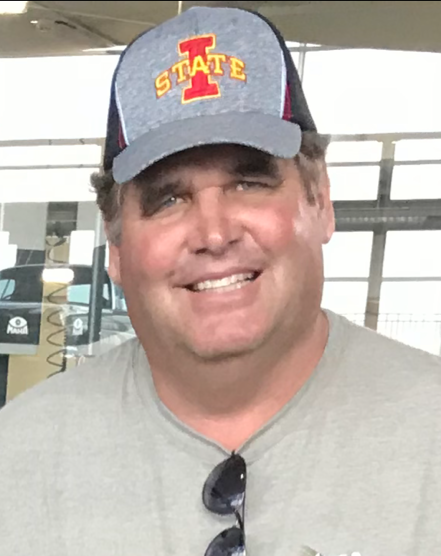 Funeral services will be held at 10:30 a.m. on Saturday, March 14, 2020, at St. Paul Evangelical Lutheran Church in Thornton, Iowa, with Pastors Rhea Evanson and Jane Harris officiating. Burial will follow in Pleasant Valley Township Cemetery in rural Swaledale. Visitation will be held at the church on Friday from 4-7 p.m.

Born January 29, 1960, Edward Joseph Caspers was one of five children born to Orville and Bernice (Nauman) Caspers. Ed grew up on the family farm outside Swaledale and purchased his own farm two miles away at the age of 18. He graduated from Rockwell-Swaledale High School in 1978, then attended and played basketball at NIACC. According to Ed, he was engaged in commodities and real estate (aka farming) his entire life.

Ed's family brought him endless joy. He enjoyed traveling and family vacations, summers on the lake and picnics. Other favorites included hunting, fishing, riding and driving his slingshot, and spelunking. Ed was an avid sports fan, both as a participant and observer. He spent many happy hours attending and cheering on his children at their various sporting events. He enjoyed touring the countryside to check on his crops and always had an ample supply of treats on hand, including mints, candy, orange slices and Twizzlers. Ed began each day with his lifelong farming friends, having coffee at the Swaledale town hall and keeping up on local events and chatter.

10 people have supported the family by purchasing them flowers or gifts from the Healing Registry.

Stunning this has happened. Way too young.Sorry for the loss of Ed.Thoughts and prayers to your family. From Bob Ytzen.

I always made time to talk to Ed whenever I ran into him, he never failed to make me laugh. Ed had such a great sense of humor, I'm really going to miss seeing him around at farm programs, elevators, Clear Lake Thursday on Main, Rockwell Lions chicken feed, in a bar or on a gravel road by my place. Very good man, honest as the day is long. Farewell my friend. Larry Kalke

I played a few games with the Swaledale Beer Nuts years back. Ed was the first baseman and I was the second baseman. In one game Ed and I turned a double play to end the inning. Ed came over to me in the dugout and told me "In all the games he played first base that was the first time he was involved in a double play" as it was mine too. The last time Ragbri came through Swaledale, Caspers had the clock open so you could go upstairs and see the working of the clock. I went up to see and there sat Ed, I said to Ed "You know Ed a few days ago I was thinking of the double play we had turned and what joy it had brought me". Ed said "That he had also been thinking of that play a few days ago". We had good laugh about the Play". I will miss Ed. God bless him and his family. May he rest in peace.

My heartfelt condolences to all of Ed's family, esp. his cousin Lori. I graduated HS with Ed and knew him to be a gentle giant with a sweet and kind spirit. He always had a smile on his face and a pleasant word to share. I was fortunate to see him at our last reunion, still the same Ed! Heartfelt prayers at this difficult time, Bev Wagaman Fisher, Marshalltown

The attached photos are added to the memorial of Edward J. Caspers to help share their legacy.

Thank you for sharing your memory of Edward