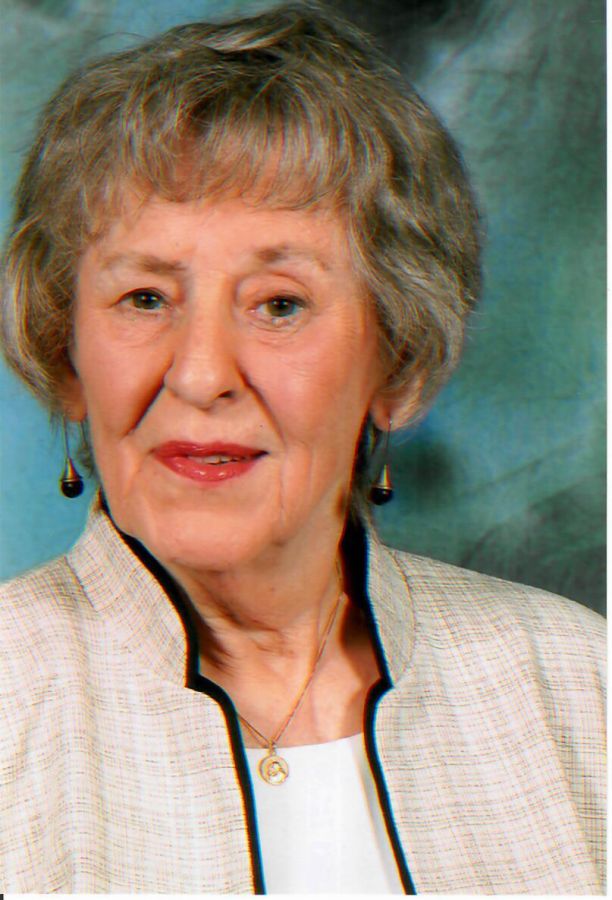 Linda was born on July 21, 1940, to Ivan LeRoy and Wilma Beatrice (Risdal) Selby in Nevada, Iowa. The blonde-haired little girl lost her daddy when she was just seven years old to an enlarged heart. She spent her childhood surrounded by The Selby family. It was a life filled with many family gatherings that oftentimes included music, played on anything that had strings, by her uncles and cousins. During her years at Nevada High School she was a cheerleader, a member of the Glee Club, The McSelton Trio and was the 1958 homecoming queen.

She married LaVern Duane Rullestad on January 30, 1959. They started their family "a mile west of Kelley" until 1962 when they moved to their farm "two miles west of Nevada." Linda worked at Donnelley Marketing, Equitable Life Insurance, Nevada Chamber of Commerce, The Nevada Journal and retired from the Ames Middle School, where she was very passionate about aiding pre-teens needing extra attention.

Linda's loves in her life - family, friends, Christmas, crossword puzzles, smoking cigarettes, beer, a good dessert, hot black coffee and Pepsi - not always in that order. Linda was an avid reader and always welcomed a challenging game of Scrabble, Cribbage and crossword puzzles. She most enjoyed the family's trips to Minnesota where she had "all her people" for one entire week each year - for 15 years in a row. All of her people include her children Jamie and Tracy (Loney) Rullestad, Dean and Diane (Rullestad) Harris, John Rullestad (Kristi Anderson Rullestad); grandchildren Shea (Rullestad) and Kyle Nikkel, Ricki (Rullestad) and Dustin Tapp, Tucker and Tiffany (Palar) Rullestad, Billy and Morgan (Owens) See, Travis See, Jacob Rullestad and Rachel Rullestad; great-grandchildren Gage, Jace, Karsyn and Cade Tapp, Hannah, Mikaya and Hunter See, Sawyer See and Charlee Nikkel; along with bonus grandchildren, Christine (See) Slayden and Christopher See.

Her battle with Multiple Sclerosis, a disease her mother also had, came to an end on Christmas Day 2019 - her favorite holiday. She was preceded in the ascension to Heaven by her parents and a brother lost in infancy, Gary Wayne.

Private family services will be held at a later date. Condolences may be expressed online at www.amesmonument.com.


Ames Monument & Cremation Center has been entrusted with the care of Linda and her family.

My deepest sympathy to the family of Linda Rullestad. I just heard of her passing today (1-5-2020). I was so happy to have some time to visit with Linda recently at Rolling Green. Blessings to your entire family, Vern. Sincerely, Elaine Mohr

Dear Vern, Jamie, Diane, John and families.
We are so sorry for your loss. We have many fond memories of Linda and the Rullestad farm. Condolences to your family.
Keith and Denise Davis

Dear Vern and Family. Dave and I send our condolences to you and your family. We were so sorry to learn of Linda's passing. Prayers are with you. Sincerely, Joyce and Dave Polaski

Vern, Jamie, Diane and John - so many good memories, vacations at Lake Okoboji, hanging at the Starlite Lounge , my brother Pat and John's band in the 80's. Linda was the fun mom & a class act, I'm sorry for you loss.

I have such fond memories of Linda. Anytime we worked together on a project/committee she was a mentor, smile maker & a true lady. Kathy Highland

Oh dear Linda, I'm so sorry to know that you're gone. I remember our wonderful Sunday nights around Guy and Ethel's dining room table, and how special you always made me feel. I was at your wedding as a little girl, and was in the old high school auditorium the night you were crowned homecoming queen. I remember the blue ruffly dress, and how I thought you were the most beautiful woman in the world. I'm in India right now, and how I wish I could come home for your services. With much love and many happy memories, your cousin Martha, fellow bearer of the Fry nose.

I memory of a much loved lady.

Linda had a heart of gold and a huge love of Puffins. ❤️ One of my favorite memories is of her inviting our family inside as she was cooking breakfast for all of us after we all had camped out at their pond. What an amazing woman she was, and she will be missed dearly. My thoughts and prayers go out to your whole family.

Thinking of the entire family, and remembering them growing up and at Vern and Linda’s home. We were frequent guests there. One dinner she prepared for us included baked potatoes, two were actual rocks that looked like the real thing! One on Chucks plate, the other on Micks. They valiantly trying to saw into the rocks and the rest of were laughing so hard!!😂...finally had to tell them “rocks, you dummies” as we thought they would break the good china plates. I think those two had a few nips before dinner ..well, so did the rest of us, but Linda kept a straight face, mostly.

One of the fondest memories I have of my dear cousin was the summer I spent with them on the Kelley farm. Especially the Saturday nice dinners at the Starlight in Nevada playing pinball and drinking Pepsi. Rest In Peace my cousin.

The services for Linda have not yet been added. Please sign up below to be notified when the services are ready.

The attached photos are added to the memorial of Linda Selby Rullestad to help share their legacy.

Thank you for sharing your memory of Linda